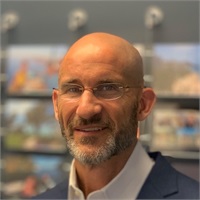 Jon Baker founded his company, Jon Baker Financial Group (JBFG), in 2000, and the financial planning firm has since grown to help more than 500 clients. He is a CERTIFIED FINANCIAL PLANNER™ (CFP®) practitioner and he also holds an M.S. in Financial Planning.

Jon received his undergraduate degree from Eckerd College in St. Petersburg, Florida.  He began his career in the financial services industry in 1991 and moved to Atlanta three years later to become the Branch Manager for J.P. Atkinson and Associates.  In 1996, he became Vice President of U.S. Planning Group, helping the firm to create a more client-friendly approach to financial planning.

During his 25 years in the industry, he has directly trained more than 40 financial advisors and has served as a mentor and coach to hundreds more. He often speaks locally to Atlanta-based executive groups, such as Kettering Executive Network, Right Management, and Vistage International. In addition, he is frequently a featured speaker on practice management at the annual Advisor Group broker-dealer convention, which is attended by more than 3,000 advisors from across the nation.

Jon and his wife, Pam, are very committed to the Cystic Fibrosis (CF) Foundation because two of their children are affected by CF. He is actively involved in several fund-raising events, ranging from black tie galas to the Great Strides Walk, and he is a founder of one of the most successful CF fund-raising events in the United States, Shamrockin’ for a Cure, which occurs each year in March. He also coaches his daughter’s A5 club volleyball team.

As every successful executive knows, superior individual performance is usually the result of collaboration, team work, talent, training and experience, all of which are focused on supporting and assisting an individual in turning out a winning performance.

Jon is assisted in the financial planning process by a team of skilled and experienced professionals. His team includes a client relationship group that interacts with clients to ensure that they are well informed and a service team that assists him in implementing clients’ financial strategies, answering their questions, and taking action when needed.

Brian Staples joined Jon Baker Financial Group in November 2012 as the Operations Manager. Besides ensuring the smooth operation of the business and office, he also oversees all day-to-day business to confirm that it remains compliant...

Patti Sheffield joined Jon Baker Financial Group in 2015 as Director of First Impressions. She is responsible for scheduling appointments, greeting visitors to the office, and making sure that the office is running smoothly on a...

Eric Michalski joined Jon Baker Financial Group in 2011 and currently holds the title of Senior Advisor. Eric works with clients to help them achieve their financial goals. After receiving his B.S. in Finance from The W.P. Carey School...

Dan Streetman joined the operations team of Jon Baker Financial Group in 2015 where he assists with many back-office operations. His enthusiasm for financial planning began in 2008 just after graduating from Richards College of...

Sam Wilkerson joined Jon Baker Financial Group in 2010 as a Paraplanner, after first working within the 401(k) industry and then for an advisory group that focused on financial planning for business owners. His initial analytical role...

In 2007, Serina’s maternal grandmother was diagnosed with Alzheimer’s disease. To assist, Serina took on the responsibility of managing her grandmother’s healthcare and financial decisions. Though it was a challenge...